Disclosure:KKY is Editor-in-Chief and JY is an Associate Editor of Journal of Asian Pacific Society of Cardiology; this did not influence acceptance. RH has no conflicts of interest to declare.

The severe acute respiratory syndrome coronavirus 2 (SARS-CoV-2) pandemic has resulted in much morbidity and mortality. The development of vaccines has provided an important tool in the battle against this pandemic. The recent randomised clinical trials published on the mRNA-based COVID-19 vaccines have demonstrated their efficacy and safety.1,2 However, with large-scale global uptake, rarer side-effects not seen in the earlier clinical trials have been reported.

Israel, one of the early leaders of vaccination uptake (using predominantly the Pfizer–BioNTech vaccine), first raised concerns about the risk of myocarditis, with reports of 275 cases of myocarditis between December 2020 and May 2021 among more than 5 million vaccinated people.3 Since then, several other reports have surfaced worldwide. In this article, we aim to summarise some of the major international data available on the incidence of myocarditis and/or pericarditis after mRNA COVID-19 vaccination, and provide an overview of the topic. Please refer to Supplementary Material Table 1 for a more detailed breakdown of the data.

Incidence of Myocarditis and Pericarditis After mRNA COVID-19 Vaccination

Comparison with background rates of myocarditis and/or pericarditis were performed to determine if these reported rates reflect a true increase in incidence. The Communicable Disease Center compared US Vaccine Adverse Event Reporting System (VAERS) data with population-based background incidence rates in the US; this demonstrated an increase in the incidence of observed over expected rates of myocarditis or pericarditis after the SARS-CoV-2 vaccination.5,6 This was further supported by a nationwide observational study in Israel, which compared incident rates of myocarditis in vaccinated versus unvaccinated groups – the risk of myocarditis increased by a factor of three after vaccination (21 versus 6 in the control group).7

The cumulative data suggest a trend towards an increase in incidence over background rates of myocarditis and pericarditis associated with SARS-CoV-2 vaccination.

The occurrence of myocarditis and/or pericarditis is seen more commonly with the administration of the second dose of the vaccine. According to the data published by US VAERS, the risk of developing myocarditis and/or pericarditis postvaccination was up to fivefold more likely after the second dose, as opposed to the first dose (1.5 versus 5.6 per million for first versus second dose, respectively).5

Though no specific numbers were provided by the UK’s Medicines & Healthcare products Regulatory Agency’s Yellow Card reporting and the European Medicines Agency, both mentioned that occurrence of myocarditis and pericarditis were more common after the second dose.8,9

Recommendations for Management of Myocarditis and Pericarditis 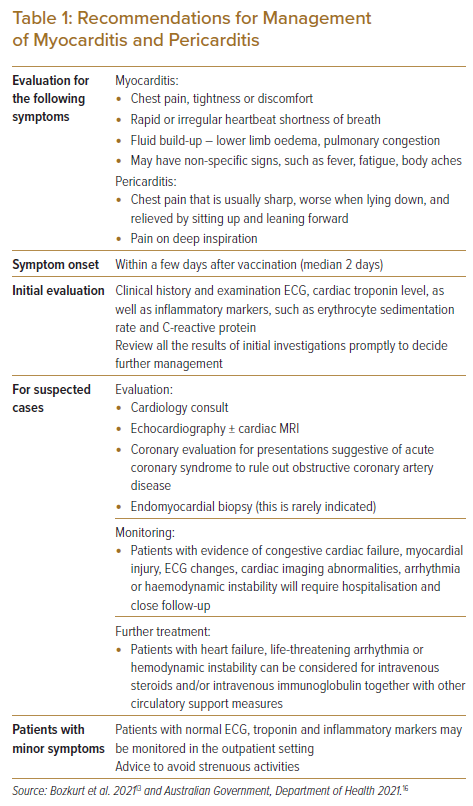 Influence of Age and Sex

The current data suggest a preponderance for young men to develop myocarditis and/or pericarditis postvaccination. Data from VAERS demonstrate that myocarditis and pericarditis were up to 10-fold more likely to occur postvaccination in men aged <30 years when compared with the US population-based background incidence rates. This difference was considerably less for adults aged >40 years.5

In an Israeli nationwide cohort study, among those with myocarditis, the median age was 25 years (interquartile range 20–34 years), and 90.9% were men. Once again, this highlights the increased risk in this particular population.7

Although the Medicines & Healthcare products Regulatory Agency and European Medicines Agency did not provide individual breakdowns of age and sex of the patients who developed possible myocarditis and/or pericarditis, they both mentioned that majority of the affected were men aged <30 years.

These statistics are further supported by a recent local nationwide publication on the incidence of pericarditis and myocarditis in Singapore post-COVID-19 vaccination.12 It found a total of nine cases of pericarditis; all of which were male, except one. This fell predominantly in the 12–19 years age range, with an incidence of 1.11 cases per 100,000 doses. A further 25 cases of myocarditis (11 with concomitant pericarditis) were diagnosed, 80% (20 cases) were male and the median age was 23 years (range 12–55 years), with 16 cases after the second dose. Similarly, a higher-than-expected number of cases was seen in males aged 12–19 and 20–29 years.12

It is not clear if this is a significant observation, and what the possible reasons for this could be. Postulations include the higher concentration in the Moderna vaccine.

Of note, in Canada, Europe and the UK, where data on AstraZeneca, an adenovirus-based vaccine, were collected, the rates of myocarditis and pericarditis ranged from 2.2 to 5.8 per million doses.

From the data, there is a signal of increased risk of pericarditis and myocarditis in men aged <30 years, although the absolute risk is very low.

Several pathophysiological mechanisms for the risk of pericarditis and myocarditis after mRNA vaccine have been proposed. Molecular mimicry between the spike protein of SARS-CoV-2 and self-antigens, triggering of pre-existing dysregulated immune pathways in predisposed individuals,nd direct immune response to mRNA have been put forth.13 Some of these would also account for the increased rates of myocarditis seen in SARS-CoV-2 infections.7

The reasons for young male predominance in pericarditis and myocarditis cases are being worked up, but possible explanations relate to sex hormone differences in immune response and myocarditis, and underdiagnosis of cardiac disease in women.13

These potential risks need to be balanced against the risk of SARS-CoV-2 infection. Of hospitalised SARS-CoV-2 patients in a similar age group (18–34 years); 21% required ventilation and 2.7% died (almost double the mortality of acute MI).14 Vaccination can significantly reduce these risks.1,2 Our local real-world data support this, with 6.6% of unvaccinated patients becoming severely ill or dying compared with just 0.9% in the fully vaccinated population.4 Additionally, COVID-19 infection can itself raise the risk of myocarditis, the risk ratio of myocarditis from SARS-CoV-2 infection is 18.28 compared with 3.24 from vaccination.7

There are some limitations to these findings. First, as the data were largely collated from self-reported national databases, the diagnosis may not necessarily fulfil strict diagnostic criteria for peri- or myocarditis. Second, inherent in such data is the inability to match for other confounding variables. Patients also possibly possessed increased clinical awareness of the risk of myocarditis/pericarditis and were therefore more likely to seek medical attention for a potentially otherwise self-limiting condition. Finally, heterogenicity of the type of data collected makes direct comparison challenging. For example, not all data sources collated data according to the brand of vaccine or first versus second dose, and often there was no clear distinction between myocarditis and pericarditis, which can have different disease processes.

While there is an increased risk of pericarditis and myocarditis in younger males, the absolute risk is low, and the US Centers for Disease Control and Prevention have recommended vaccination in those aged ≥12 years to mitigate the risk of serious SARS-CoV-2 infection.15 Similarly, all the countries discussed in Supplementary Material Table 1 have adopted similar recommendations. This is because of the efficacy of mRNA-based vaccines in preventing serious illness and transmission of disease, and the relatively small numbers of adverse side-effects of myocarditis/pericarditis.1,2

Additional precautions may be put in place to mitigate the risks, such as raising awareness of these conditions, advice on seeking early medical attention and reducing physical activity in the immediate phase postvaccination. Although uncommon, patients, particular younger males, who begin feeling unwell shortly after COVID-19 vaccinations, should be further evaluated. See Table 1 for more details. 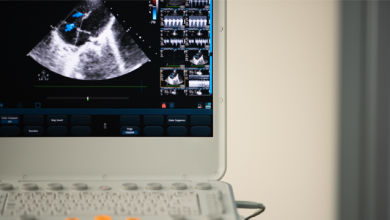 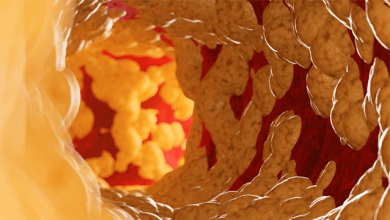 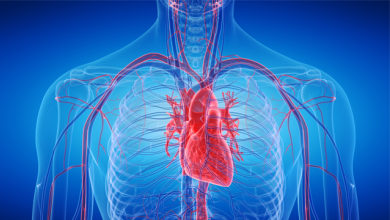 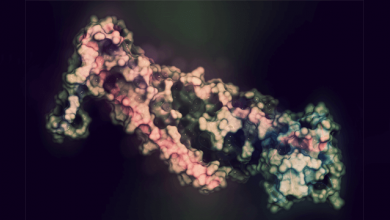